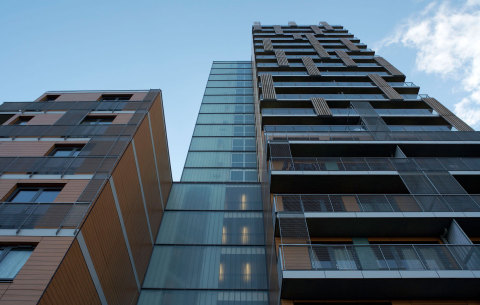 Build To Rent: Planning for the future.

It's a curious thing, but at the BPF Build to Rent conference on the 9th February, a straw poll conducted amongst the delegates showed a strong majority in favour of negotiated covenants as opposed to a separate user class. Odd, since one would have thought that the very definition of Build to Rent was to build to rent. No?

Well, no as it happens. It would seem that the institutions, who are apparently leading the B2R revolution, are in fact hedging their bets. Who'd have thought it?

Back in 2012, Sir Adrian Montague issued his clarion cry for a professionally run, institutionally owned Private Rental Sector which would do away with all the mini Rachman's, raise standards, create long term security and fulfil every governments' dream by building thousands of new homes every year. This call was heard loud and clear and PRS became the new institutional nirvana. At least conceptually.

So, what has happened since? Well, every agent of note now has a PRS and or B2R expert sitting in their capital markets or investment team. Institutions have thrown themselves body and soul into the business of convincing everyone they're all for it, a throng of consultants, advisers and management specialists rush around looking to deliver the coup de foudre which will light up this fledgling industry, and every other day a new scheme is announced in Manchester.

Back to the point in hand and a question: will negotiated covenants deliver Sir Adrian Montague's vision? Well, each to their own but, my view is no.  I am sure that covenants enshrined in S106 agreements are all well and good but they don't offer any consistency to the industry.  They are wholly dependant upon the negotiating skills of the developer, the willingness of the LA and each will be tailored accordingly. Because of this what may end up being built is a scheme that benefits from the LA's largesse in terms of what affordable housing and other payments they are prepared to concede, and schemes that are really designed for the sales market deferred say, 5-10-15 years depending upon market conditions.

So, what of it? If that's the way the market works why not?  The government doesn't seem to be in favour of creating a separate user class preferring that the sector finds it's own way forward. But that's not how they handled HMO's. Is it.

A new user class has a number of advantages for the sector. I say sector rather than identifying any of the (p)layers because it's the sector that should really benefit and the players play by the rules. Central to a new user class would be permanence. A B2R scheme would be designed to remain 'rental only' in perpetuity. Now that gives a great deal of clarity and concentrates the mind.

Valuation: Currently vacillating over the VP-v-income conundrum, RICS would have a clear guide and experience of how to value a B2R scheme. Easy; income, quality, location, covenant and lastly, since they will have a part to play, data from the IPD. It's how commercial schemes are valued. A combination of the above determines the yield at which point a capital value is arrived at.

Suitability: Given that B2R would be exactly that, proper thought would be given to the long term management and maintenance of the building. It would be specifically designed to rent, it would be durable, it would be easy to maintain and designed to meet the needs of a whole new generation of sophisticated renters. Essential Living, to my mind, have resolved this well

Competitiveness: One of the oft heard cries of the PRS market is that it cannot compete, at least in London, with the B2S market.  A new user class should provide a level playing field whereby a B2R scheme benefits from certain exemptions: delivering affordable housing, S106 payments and even CIL contributions. If the Government is serious about building 200,000 homes each year they cannot rely upon the house builders to do it. As I've said many times, it's not their job to respond to government targets. Their responsibility is to their shareholders.

Deep Roots: If we are serious about creating a new asset class that not just  raises the bar but forms a whole new paradigm, we have to frame the conditions in which it can take roots and thrive. A new user class will do just that.  There can be no equivocation, the asset has to be held long term and or managed innovatively and efficiently. This will give the sector time to become mature and allow the management piece to evolve into a coherent yield boosting specialism which can begin to develop it's business into something far more sophisticated benefitting both asset owners and renters alike.

Security: The PRS market is not known for security of tenure. Private landlords can be capricious, don't offer consistency of approach and can simply dispose of their property at any time requiring the tenant to leave. Validated by new user class, a long held B2R asset can offer much longer terms to the tenant (an ideal favoured by Fizzy Living), a consistency of approach and security based on the knowledge that their home is not about to be sold from underneath them.

The Conservative's are not shy about putting their full weight behind First Time Buyers and creating market conditions that boost home ownership. For perhaps the first time, here is an opportunity for them to take ownership of the residential rental market by leading the transformation of it with B2R.  This balances their energies, opens up new initiatives and appeals to the broader community. It's a win-win.

Whether or not the PRS/B2R protagonists are in favour of a new user class, it seems clear to me that the structure it offers would give better definition to a market that, at the moment, is rather disparate. I doubt that it would be initially popular but ultimately, I think it's what we need.